SEO Behind the Scenes Diagnosing Google Algorithm Updates for Keywords

Hey everybody. This is Alex Furfaro and I just wanted to record this little behind-the-scenes SEO video here about the Google algorithm update.

The algorithm happened at the beginning of May, from May 4th to May 18th. Those dates are important when we look back at a rank tracking but I was working on one of my clients reports today and just saw a couple of things that I wanted to point out.

It’s been about six months since I’ve really seen a big algorithm update like this and I just wanted to share some info.

Unfortunately, most of the SEO news articles don’t really say too much about these algorithms. They’re often hyperbolic in some of the things that they say making “generic claims” about how to “best optimize for this algorithm.”

The things that I look at is what industries did the algorithm focus on. In this case, they say:

Those types of industries are hit the most where if I scroll down here it always says:

Most of the time, if the news sites give some SEO recommendations, they basically state ‘standard SEO practices’ are things you need to do to increase your rankings. Just being in the industry I’ve heard kind of the same things over and over for 5 years and that’s why I don’t pay too much attention to them.

Going over to some of these algorithm updates like I said May 4th to May 18th is the day we’re looking at and this client, unfortunately, is in the health industry which was hit pretty hard and some of their keywords rankings had dropped.

These are just some screenshots of some rank tracking this keyword is specifically for a dentist.

You can see here on May 6th we see our rankings start to drop and then that bottoms out on May 17th. It comes back up just a little bit but you can see primarily this term was affected directly in that timeline of the algorithm update. I saw this across probably 10 different terms of theirs that were really similar. Here are 3 other examples: 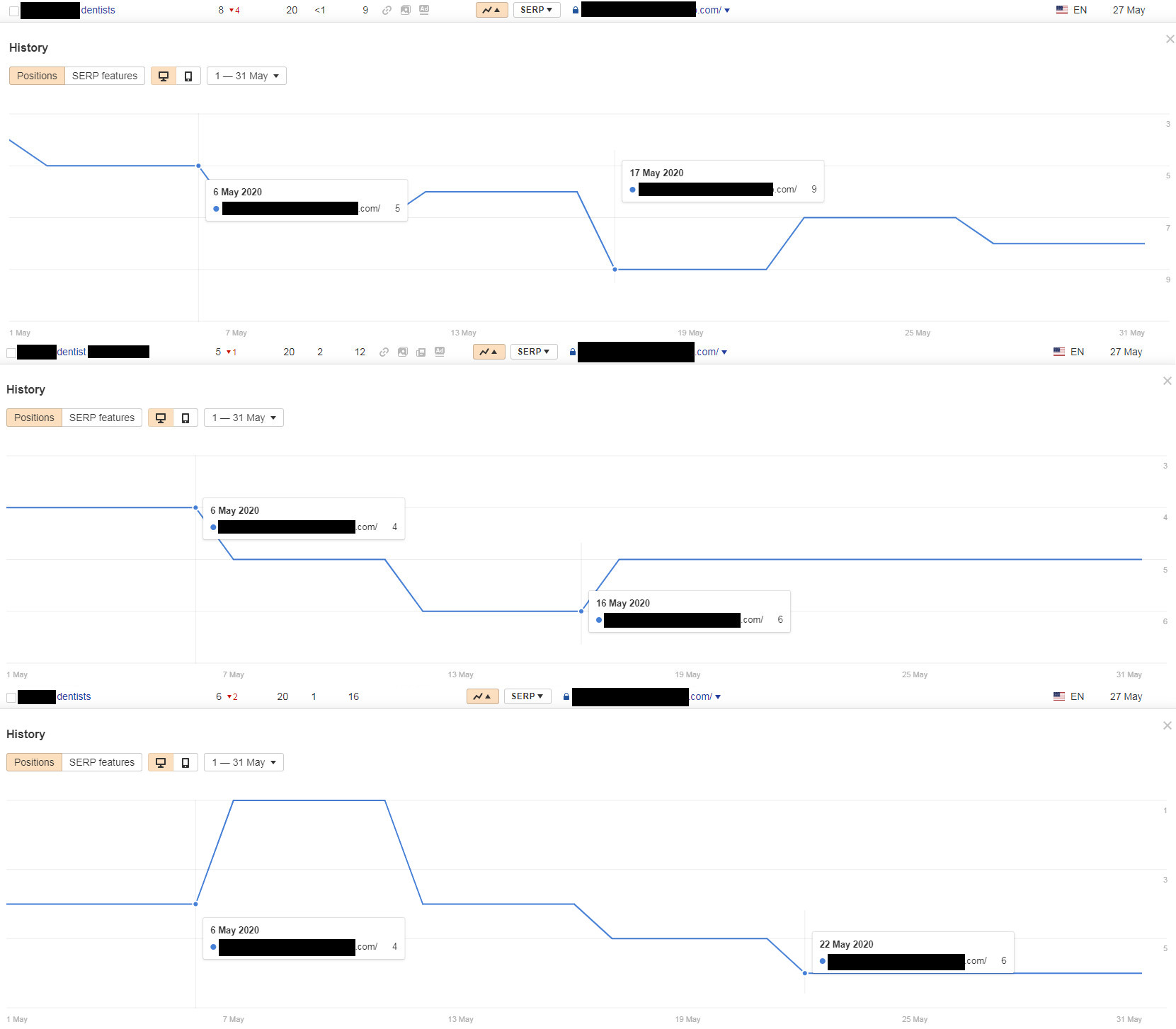 Unfortunately like I said this is something that happens during algorithm updates: some websites win and sometimes websites lose.

When we identify these keywords and metrics though we can really get an understanding of what’s working, what isn’t, what pages were affected, what keywords are affected, and which weren’t.

The other example that I have down here at the bottom is this dental implants page and you can see this is /dental-services/dental-implants. This web page was ranking number 2 for this exact keyword on May 26th and then that dropped out of nowhere here. It dropped 24 spots all the way to number 27.

This is something that my clients will occasionally see and they’ll freak out a little bit because they’ll be like “Wait what happened? We were almost number one and now all of a sudden we’re nowhere to be found.”

Believe it or not, this happens all the time and I’m used to these things happening. They (the clients) aren’t used to it but I explain the situation to them and what I do is I go back and look at all the data that we have on this webpage and figure out, what could have happened to cause these problems?

The only thing we did do outside of updating that one sentence was we built one link you can see here /dental-services/dental-implants (Column F) in our linking strategy spreadsheet. These were the sites that were linking to our specific client page (Column B) and this was posted on 5-11-20.

Normally when we’re link building, we see results change from about two weeks to eight weeks after we built the link. It doesn’t happen right away.

In that in that six-week window is usually where we see a lot of the rankings push and the 26th date is right after at that two-week “delay” time frame.

I’m really confident in saying that the link we built was affecting this keyword ranking.

Now you could say “well what you’re supposed to be doing is helping the increase helping the rankings increase, right?

Occasionally, this is what Google will do. Is that when we built links to certain pages – and this one in particular never had any links going to it before – when we’re building new links to pages, sometimes Google will drop your rankings and then they’ll bump you right back up. Typically you’ll move you higher than before but, obviously, not always.

Also the rankings change minute by minute, believe it or not. If you search the same thing 50 different times in the matter of an hour or two, you might see the ranking shift  5, 6, or 10 different times. Our rank tracking could have just picked up this ranking position at the wrong time too. The ranking hasn’t actually changed but for that one instance where it was checking our rankings, Google was testing other sites in the Top 10 and ours happened to be 27 at that time. Again, this happens all the time.

My estimation in reviewing all the data that we had about this webpage, knowing that it was a high ranking page in Google for a significant amount of time, the data that we have about the linking strategy, and knowing there were not very many on-page SEO changes, I’m confident in saying that this webpage for this specific keyword – we’re going to come back right into the top 10. We’ll probably be number 2 or 3,  right where we were before or maybe even number 1.

Just a little interesting thing here to share that I see behind the scenes all the time but most people, unless you’re working with an SEO like me, you would not get to see these types of things.

I hope you enjoyed this video and we’ll see the next one.

Have a good one.

Algorithm changes or not, we stick to our plan that’s worked for the better part of 4 years now (and ignore the “SEO Guru” hacks).

The proof is in the EXECUTION. As we continue to build high-quality links, optimized content, and use really dig into the nitty-gritty of Google’s algorithm to really get down to what works and what doesn’t, time after time we see these same things happen – we keep building and our rankings keep going up. 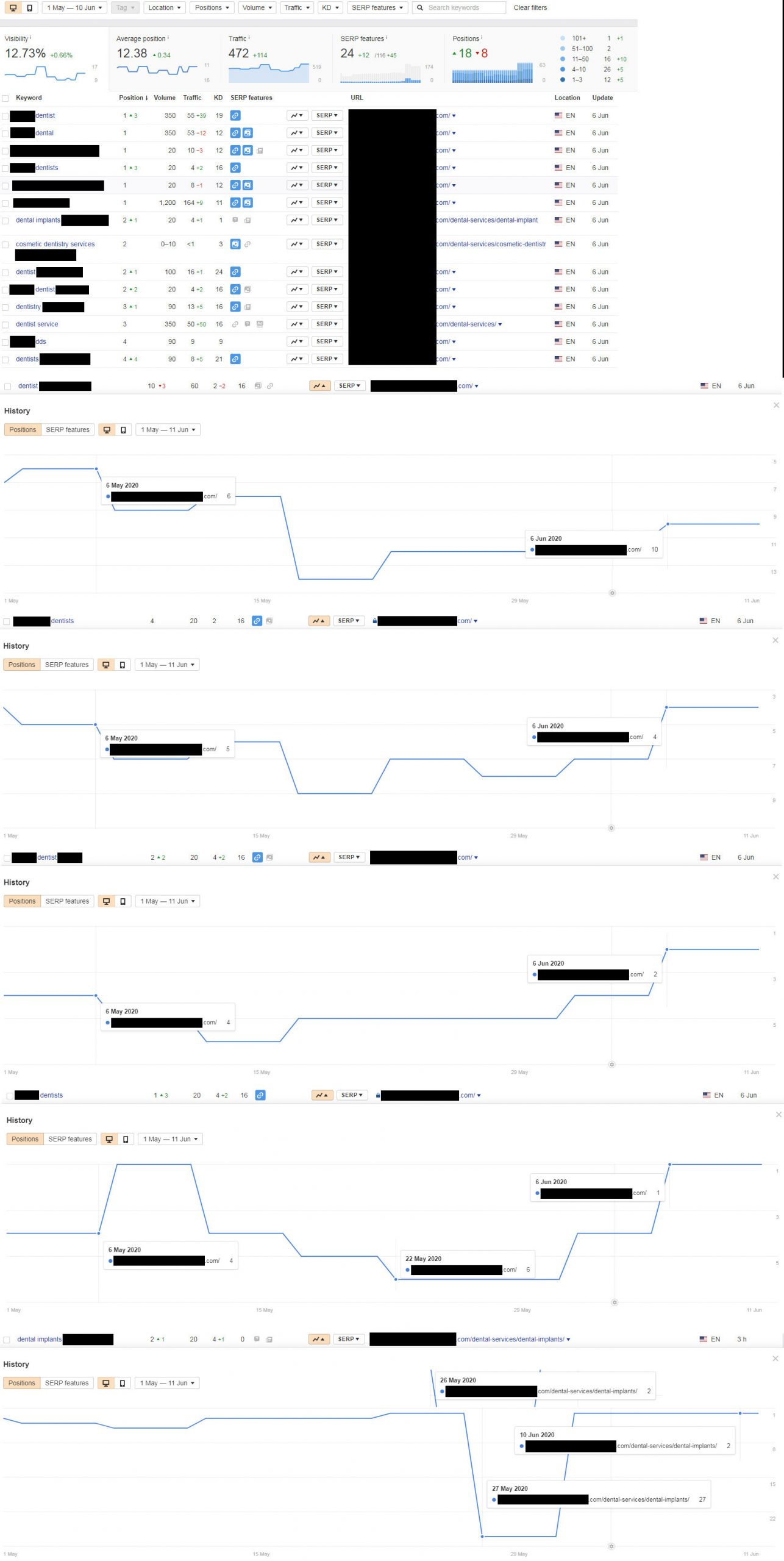 AlexFurfaroSEO
Alex Furfaro SEO Consulting is a leading search engine marketing service based in the Columbus, Ohio region. By creating a digital fortress around your website, our methodical strategy creates long lasting results. With a mix of industry standard best practices and options that are advanced and out of the box, I've had deep success ranking in some of the most competitive environments. I grew up in a family-owned business and experienced first-hand the value of your word and a handshake. After success in the engineering world managing multi-million dollar projects, I discovered my passion for entrepreneurship in Search Engine Optimization. My technically difficult engineering background blended with my family business upbringing is a unique mesh of experiences that is one of a kind. I embrace both past and present to be a genuine, hard working small business while creating the leveraged success of a Fortune 500 corporation. Visit my website today for your free video analysis. http://alexfurfaro.com/columbus-seo/
Recommended Posts 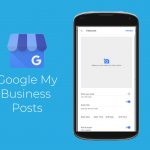